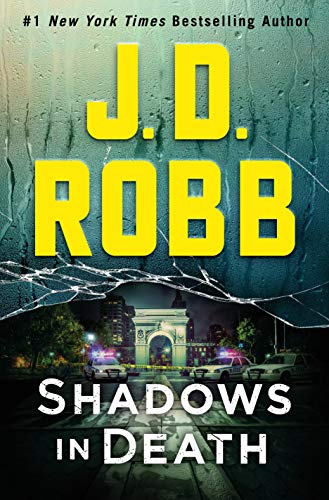 In the new novel in the #1 New York Times-bestselling series, Lt. Eve Dallas is about to walk into the shadows of her husband’s dangerous past…

While Eve examines a fresh body in Washington Square Park, her husband, Roarke, spots a man among the onlookers he’s known since his younger days on the streets of Dublin. A man who claims to be his half brother. A man who kills for a living—and who burns with hatred for him.

Eve is quick to suspect that the victim’s spouse—resentful over his wife’s affair and poised to inherit her fortune—would have happily paid an assassin to do his dirty work. Roarke is just as quick to warn her that if Lorcan Cobbe is the hitman, she needs to be careful. Law enforcement agencies worldwide have pursued this cold-hearted killer for years, to no avail. And his lazy smirk when he looked Roarke’s way indicates that he will target anyone who matters to Roarke…and is confident he’ll get away with it.

As the title states, Shadow In Death features a shadow from Roarke’s past. This installment starts off at a murder scene in Washington Square Park of a young wife and mother who had nothing stolen from her. While Eve is securing the crime scene, Roarke spots a face from his past. Lorcan Cobbe was as an enforcer for Patrick Roarke ‘s gang and he’s looking for revenge. The murder at the park was just a warning to let Roarke know that he’s the assassin who murdered the young woman. What better payback can he get by taking away his fortune, friends and best of all his wife, Eve Dallas. Now Roarke, Eve, and their entire team are on a manhunt for Cobbe while he does the same.

Overall, Shadow In Death was tense, intriguing, nonstop action from start to finish as we join the hunt to catch Cobbe. J.D. Robb once again continues to come up with the fantastic intriguing plots. With such a wonderful mind like hers, I hope J.D. Robb will continue to give us many more In Death installments!