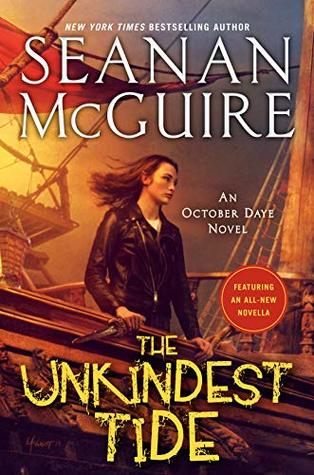 Hundreds of years ago, the Selkies made a deal with the sea witch: they would have the sea for as long as she allowed it, and when the time came, she would call in all their debts at once. Many people assumed that day would never come. Those people were wrong.

When the Luidaeg—October “Toby” Daye’s oldest and most dangerous ally—tells her the time has come for the Selkies to fulfill their side of the bargain, and that Toby must be a part of the process, Toby can’t refuse. Literally. The Selkies aren’t the only ones in debt to the Luidaeg, and Toby has to pay what she owes like anyone else. They will travel to the fabled Duchy of Ships and call a convocation of the Selkies, telling them to come and meet the Luidaeg’s price…or face the consequences.

Of course, nothing is that simple. When Dianda Lorden’s brother appears to arrest Dianda for treason against the Undersea, when a Selkie woman is stripped of her skin and then murdered, when everything is falling apart, that’s when Toby will have to answer the real question of the hour.

As a fan of the October Daye series, I want say it’s a real joy to me to return. I’ve been following the series since book 1, Rosemary and Rue, so there are many storylines I have been waiting for to get its own novel. So I’m sure you can see that The Unkindest Tide is definitely one of those installments in a series, I would not miss to read.

As you know, Luidaeg made a deal with the Selkies long ago because of what happened to her children the Roane. The Selkies were told one day they would have to make a choice which are to live in the sea or live on the land. The worst thing is not all of the Selkies would get those choices. Sadly, the day has arrived for the Selkies to pay for their debts. The same goes for October who will play a part in the process while also paying her debt to Luidaeg. So Toby and her group travel out to sea to the Duchy of Ships where there will be convocation of the Selkies. However, once they arrive, Toby soon learns that the Selkies are not the only ones who are in trouble. Dianda Lorden’s brother also arrives and arrests her for treason. To make matters worse, Toby’s the only one who can rescue the Lorden’s youngest son who is trapped back home and could be taken as a hostage if found by his uncle. Oh, did I mention a Selkie woman ends up dead? Yup, its just a typical day for October Daye.

Overall, The Unkindest Tide was a fantastic addition to the series! As I said before, this installment had a plot that all fans have been waiting for since One Salt Sea. So the waiting for it was definitely worth it. I was happy to see the Luidaeg finally get closure for what happened to the Roane. She really did take a big step forward and is finally letting go of the past. Oh, fans will most definitely be please to know we get plenty of Toby and Tybalt emotional scenes that will leave you squealing and wanting more. Also, I enjoyed the Raj novella included, Hope is Swift, set at the same time as The Unkindest Tide. It was really interesting to see what goes on in Raj’s head and what his feelings are as he gets closer to becoming king. Now the waiting begins again for the next installment, A Killing Frost.

*I received The Unkindest Tide from Berkley Publishing Group via Netgalley in return for an honest review.*