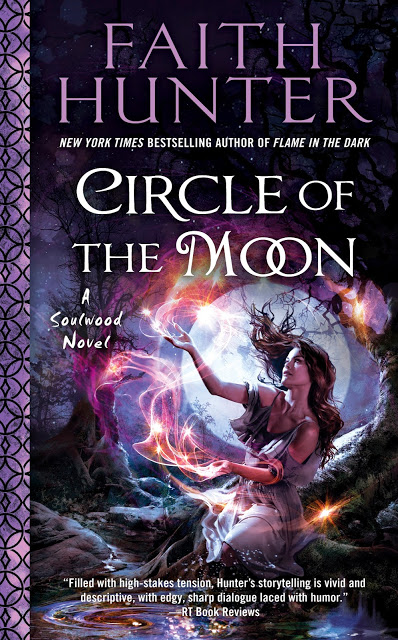 Nell can draw magic from the land around her, and lately she’s been using it to help the Psy-Law Enforcement Division, which solves paranormal crimes. Joining the team at PsyLED has allowed her to learn more about her powers and the world she always shunned–and to find true friends.

Head agent Rick LaFleur shifts into a panther when the moon calls him, but this time, something has gone wrong. Rick calls Nell from a riverbank–he’s naked, with no memory of how he came to be there, and there’s a dead black cat, sacrificed in a witch circle and killed by black magic, lying next to him.

Then more animals turn up dead, and team rushes to investigate. A blood-witch is out to kill. But when it seems as if their leader is involved in the crime, the bonds that hold the team together could shatter at any moment.

Nell Ingram is back in Circle of the Moon! After her experience as a tree, Nell feels everything is back to normal. As always, Nell is focused on her job, getting custody of her young sister, Mud, and her relationship with Occam. Although Nell and her team are recovering from their last big assignment, they are soon pulled into another one. It all starts when Nell gets a call from her boss Rick LaFleur who woke up to find himself naked outside a witches circle where a black cat has been sacrificed. Due to not remembering what happened to him, Rick wants his team to investigate this. It soon becomes clear to the team that someone is using magic to summon Rick in his werepanther form. What started out as a mystery of what happened to Rick soon turns out to be something bigger.

Overall, Circle of the Moon was another fantastic addition! We not only get to see how Nell has grown since the series began but other characters as well. It was also cute to see more of Nell and Occam’s growing romance. One character I felt sorry for was Rick, poor guy cannot seem to catch a break. It’s a good thing he has Nell and the team to support him when he needs it. I look forward to reading the next installment by Faith Hunter especially because there is never a dull moment with her heroines.

*I received Circle of The Moon from Berkley Publishing Group via Netgalley in return for an honest review.*