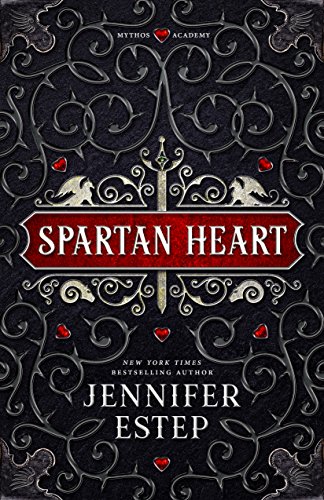 At Mythos Academy, everyone knows exactly who I am: Rory Forseti, Spartan girl and the daughter of Reapers.

Even though I fought alongside my cousin Gwen Frost to save the mythological world from Loki and his evil Reapers of Chaos, I’m still the most hated girl at the academy because of all the horrible things my parents did. I had hoped that this school year would be different, but the other kids just won’t let me forget about my parents.

But something strange is going on at the Colorado academy. First, I run into a Viking guy who dislikes me more than most. Then I notice some odd artifacts in the Library of Antiquities. And worst of all, I start hearing rumors about a new group of Reapers who can summon mythological monsters.

I might be the most hated girl at Mythos Academy, but I’m also the only one who can save it . . .

Where do I even start?

I was happy to hear that Jennifer Estep decided to write a spinoff series of the Mythos Academy! Not to mention that the series features Rory Forseti, Gwen Frost’s cousin!

If there was any character who deserves her own series its Rory because if you know her story then this the perfect way for her to get her own adventure and finally come to terms and peace with her parent’s past actions.

Spartan Heart starts off with Rory Forseti on her first day of new school year which she knows is going be horrible. Despite her actions in helping to defeat Loki and the Reapers, Rory is still the most hated girl at the Mythos Academy in Colorado due to her parents being Reapers. Already used to people saying things about her, Rory just ignores them as she’s done. Its a good thing too because when Rory soon learns the hard way that the Reapers are still active when she finds a couple of them trying to steal powerful artifacts. Now facing a new threat, Rory is determined to stop the Reapers and their new leader from stealing more artifacts in order to stop their plans of dominating the world.

Overall, I enjoyed Spartan Heart as the first installment to a new series. Ever since we met Rory in Midnight Frost, part of me always wanted Rory to get her own series and I got my wish! Now Rory’s a champion and a mission that will show everybody her true worth and prove to those who ridiculed her that she’s not like her parents and will fight for justice instead of evil. Luckily, Rory has news friends that will help her on her new journey including a potential love interest. As for the new leader of the Reapers, I wasn’t surprise who it was and he’s the perfect villain for Rory to go up against. I really can’t wait to see what Jennifer Estep has planned for Rory in the next two installments. The wait is already killing me!