We finally have the cover for Wildfire, the third and final installment of the Hidden Legacy series!

Out of the three Hidden Legacy covers, I have to say this one is a real beauty.

So click below to get a look at this beautiful cover along with an updated blurb of what Ilona Andrews has in store for Nevada and Rogan. 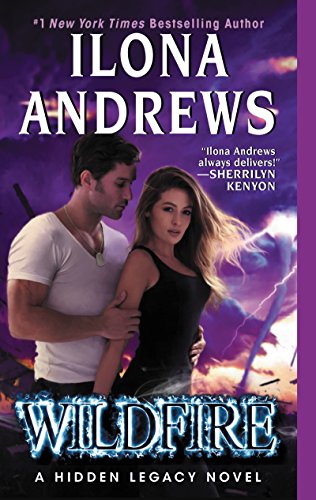 From Ilona Andrews, #1 New York Times bestselling author, the thrilling conclusion to her Hidden Legacy series, as Nevada and Rogan grapple with a power beyond even their imagination…

Nevada Baylor can’t decide which is more frustrating—harnessing her truthseeker abilities or dealing with Connor “Mad” Rogan and their evolving relationship. Yes, the billionaire Prime is helping her navigate the complex magical world in which she’s become a crucial player—and sometimes a pawn—but she also has to deal with his ex-fiancée, whose husband has disappeared, and whose damsel-in-distress act is wearing very, very thin.

Rogan faces his own challenges, too, as Nevada’s magical rank has made her a desirable match for other Primes. Controlling his immense powers is child’s play next to controlling his conflicting emotions. And now he and Nevada are confronted by a new threat within her own family. Can they face this together? Or is their world about to go up in smoke?