Got exciting news for you!

Yup, in a couple of weeks we’ll be getting our hands on the next installment of the Elder Races series!

So if want to get a peek at the blurb and cover before deciding to pre-order it, just click below.

END_OF_DOCUMENT_TOKEN_TO_BE_REPLACED

A couple of weeks ago I posted that Jennifer Estep would be writing two new short stories about two side characters.

We got Unwanted starring Finn back in July and now on December 12, 1016 we will be getting Nice Guys Bite.

This next short story will be about Silvio Sanchez, the vampire assistant of Gin Blanco!

Oh, but be sure to keep eye out on my blog for the cover which will probably be released any day now.

Now….just click below to get a sneak peek of what Jennifer Estep has in store for Silvio!

END_OF_DOCUMENT_TOKEN_TO_BE_REPLACED

If you’re a fan of Nalini Singh and haven’t started her Rock Kiss series, then this your chance to start!

You can get Rock Addiction, the first installment, free for a limited time but you have to head over to iBooks.

Better hurry before it over.

END_OF_DOCUMENT_TOKEN_TO_BE_REPLACED

Calling all fans of the Vampire Academy series!

If you haven’t heard the news then you’re on luck!

On November 29, 2016, the Vampire Academy 10th Anniversary Edition will be released!

Yay! Vampire Academy turns ten next year and  gets a new cover.

Now why is this important news?

Well,  Richelle Mead has announced that this special edition will include 4 new bonus stories!

If you’re curious about what these short stories will be about click here.

Once you’re done with that, click here to read a small excerpt from the prequel short story, The Turn and the Flame located at Richelle Mead’s Journal/Blog/Random Thoughts.

Got great news for you guys!

The teaser cover and blurb of Lord of Shadows, book 2 of The Dark Artifices series, are out!

May 23, 2017 may seem far away but at least we have the cover and blurb to keep us company.

Besides, lets not forget that Cassandra Clare is well known for giving out teasers of her books.

Remember City of Heavenly Fire of The Mortal Instruments series?

In fact, if you click here you’ll find quite a number of snippets of Lord of Shadows.

Now to get a glimpse of the teaser cover and the blurb just click below and enjoy!

Be sure to keep an eye out for the official cover!

END_OF_DOCUMENT_TOKEN_TO_BE_REPLACED

Got news for those who are excited for The Roman, the next and final novel of The Florentine series!

Right now on iTunes, you can read the prologue & chapters 1-4 of The Roman!

Head over to iTunes to get the free sample of the final installment of The Florentine series by Sylvain Reynard!

After reading such an intense teaser, the waiting is even more excruciating but we have to calm ourselves and remember that it won’t be long until we finally reach December 6, 2016.

Raven and her sister, Cara, are at the mercy of a small detachment of Florentine vampyres, who are delivering them as a peace offering to the feared Curia in Rome.

Though she’s unsure William survived the coup that toppled his principality, Raven is determined to protect her sister at all costs, even if it means challenging Borek, the commander of the detachment.

In an effort to keep Raven from falling into the hands of his enemies, William puts himself at the mercy of the Roman, the dangerous and mysterious vampyre king of Italy. But the Roman is not what he expects …

Alliances and enmities will shift and merge as William struggles to save the woman he loves and his principality, without plunging the vampyre population into a world war.

This stunning conclusion to the Florentine series will take readers across Italy and beyond as the lovers fight to remain together. Forever. 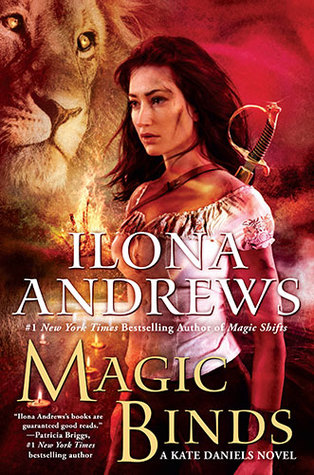 Mercenary Kate Daniels knows all too well that magic in post-Shift Atlanta is a dangerous business. But nothing she’s faced could have prepared her for this…

Kate and the former Beast Lord Curran Lennart are finally making their relationship official. But there are some steep obstacles standing in the way of their walk to the altar…

Kate’s father, Roland, has kidnapped the demigod Saiman and is slowly bleeding him dry in his never-ending bid for power. A Witch Oracle has predicted that if Kate marries the man she loves, Atlanta will burn and she will lose him forever. And the only person Kate can ask for help is long dead.

The odds are impossible. The future is grim. But Kate Daniels has never been one to play by the rules…