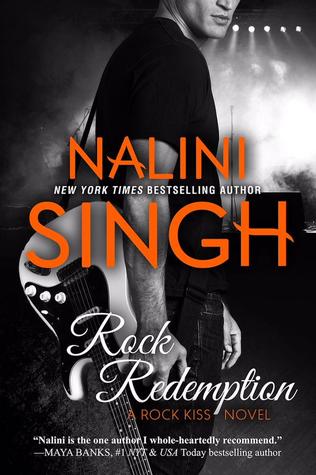 Kit Devigny could have loved rock guitarist Noah St. John. Their friendship burned with the promise of intense passion and searing tenderness…until the night Noah deliberately shattered her heart.

Noah knows he destroyed something precious the night he chose to betray Kit, but he’d rather she hate him than learn his darkest secret. All he has left is his music. It’s his saving grace, but it doesn’t silence the voices that keep him up at night. Chasing oblivion through endless one-night-stands, he earns a few hours’ sleep and his bad boy reputation.

When a media error sees Noah and Kit dubbed the new “it” couple, Kit discovers her chance at the role of a lifetime hinges on riding the media wave. Wanting—needing—to give Kit this, even if he can’t give her everything, Noah agrees to play the adoring boyfriend. Only the illusion is suddenly too real, too painful, too beautiful…and it may be too late for the redemption of Noah St. John.

We were introduced to Kit Devigny and Noah St. John in Rock Addiction where we also learned that they were once really close friends two years before the series. Despite Noah’s reputation with women, Kit slowly began to fall in love with him and had hopes of one day being together. That all changed one night when Noah brutally and intentionally broke her heart and trust while making it clear that he didn’t want Kit in any kind of a romantic way. That night not only destroyed their friendship but it also caused a rift between the two that still hasn’t disappeared after two years.

In Rock Redemption, Noah unintentionally reaches out to Kit who immediately goes to his side despite the pain and humiliation she still feels because of that horrible night.This encounter results in Kit and Noah both wanting to pick up the friendship that was destroyed two years ago so slowly and bit by bit begin to repair it. However, this results in a media frenzy that they’re now a couple. Before they can deny it, Kit and Noah’s publicist sees this as an amazing opportunity to boost Kit’s career. While Kit refuses to use Noah in such a way, Noah agrees to the “fake” and temporary relationship in order to help Kit after what he did to her. Unfortunately, it’s not long  before they start to realize that the pull between them is too strong to ignore.

Gotta say this has been one of the toughest and emotional story I have ever read. As I read through Rock Redemption there were so many moments that made my heartstrings get tugged at especially when I was reading Noah’s POVs where you can tell he adores Kit but believes he doesn’t deserve to be with her. Now the previous stories also involved emotional traumas for the other characters but Rock Redemption was a difficult one to read. Since reading Rock Addiction I had an idea of what might have happened to Noah and although I was right it made me wish I was wrong because Nalini Singh did an excellent job in writing such a heartbreaking novel but powerful novel. Nonetheless, Nalini Singh also demonstrated how two people clearly in love are able to come together and overcome their fears and difficulties.

*I want to thank Nalini Singh and TKA Distribution  for providing this ARC in exchange for an honest review.*